The very thought of my motorcycle being towed away pisses me off. I love my motorcycle so much that I ensure to park it safely in a designated place. Luckily, I never witnessed such a situation with my motorcycle.

The traffic police, especially in #Bengaluru, have zero tolerance for wrongful parking of vehicles in the busy areas. The photograph below, captured in Commercial Street, talks it all.

Whenever I park my motorcycle in the busy streets of the city, I go through so many questions in my mind. I ask myself whether I am parking in the no-parking zone, is it safe to park here or will it hinder other vehicle movement?

During my commute between office and home, I come across many vehicles towed away for parking in a no-parking zone. A gang of vigilants, hired by the traffic police on daily wage, keep moving in a towing vehicle. One traffic police personnel usually accompanies them. They also carry a pocket camera!

As soon as they come across a motorcycle or a car parked in a no-parking zone, they photograph the offence as proof and tow away the vehicle. Four or five of them lift the motorcycles and stack it in the towing truck, which has a capacity to carry eight to ten motorbikes. If it is a car, they usually clamp it or tow away if it is hindering the traffic movement.

If I were the owner of one of those motorcycles, I would have really panicked because the thought that will come to my mind is “somebody stole my bike, what to do now?”

I saw my friend face this kind of situation. He was like going mad at a very though of losing his scooter to a thief. The owner of small shop, in front of which he had parked his scooter, told him that the traffic police towed it away for parking in no-parking zone.

Not a pleasant situation though, he was relieved because nobody stole his bike. It was with the traffic police, a small fine or bribe will release his gifted scooter. Later, he got his bike released with a warning. Of course, not without a fine!

The situation was better because if somebody stole his bike, it was near to impossible to recover it. The police are not successful all the time. I personally lost one motorcycle, which the cops never recovered it for me. 😦

The problem is not only with wrongful parking. There is a serious problem with respect to traffic discipline. In our country, we are yet to see discipline in vehicular traffic. For example, lane discipline. A lot of them jump the lane and block the on-coming vehicles. In a moment, same thing happens in the opposite side as well leading to huge pile of vehicles going nowhere.

The traffic control police are not to be seen anywhere nearby. Let me not pull them. Few volunteers step in to take control of the traffic and help ease the traffic flow.

I faced a situation in the Kamaraj Street, Bengaluru. I waited behind a vehicle for a long time only to realize later that there was no driver in it. The vehicles behind me were honking as if I was planning to settle down there forever.

The word honking reminds me of an image I came across in the Facebook. A photograph of an SUV, behind which was written – “honk if you are not born to one father.” This message is nothing but a result of frustration of the owner of the vehicle because of the reckless honking by some senseless people. I do not appreciate both the attitudes.

The traffic police are trying their best but they will never succeed until we change our attitude. We can reach our destination early if we leave home in time and follow traffic discipline. 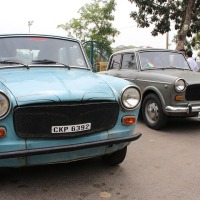